The first ever Poole Harbour Boat Show took place over the weekend of the 9th and 10th May 2015 and featured waterborne activities, live music and fireworks alongside quayside stands and tall ships. Poole Quay Boat Haven was filled with exhibitors’ boats, training vessels, a navy ship and a lifeboat, all of which were on display to the public.

The free two-day event attracted over 15,000 visitors and received universally positive feedback, with the majority of exhibitors renewing for 2016 before the 2015 show had even finished! Some stallholders had to send for more stock and quayside businesses reported a huge boost to their trade. The show seemed to strike a good balance between providing family entertainment and attracting visitors who were interested in buying marine products. 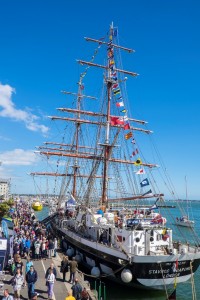 In 2016 the show will take place over three days, from Friday 20th – Sunday 22nd May. The Friday will be a Press Day, with the pontoons open only to VIPs, sponsors, and guests of the marina exhibitors, but stalls will line the Quay on all three days and will be open to everybody. Fireworks will be taking place on the Friday evening and there will be more waterborne activities and displays for visitors to enjoy.

In 2017, the Poole Harbour Boat Show will coincide with the European Maritime Day, which is a high-profile conference taking place at the Lighthouse. It will be the first time this internationally important event has taken place in the UK and, together with the boat show, the two events will combine to become a maritime festival lasting several days.

Jim Stewart, chief executive of Poole Harbour Commissioners, said of the 2015 show: ‘To hear such a positive response from so many involved in the event and particularly from the public was overwhelming. I acknowledge all the hard work from the team and our sponsors who put so much into making this event happen and we are excited for its future, particularly as we lead into 2017 and the prestigious European Maritime Day which Poole will host’.

‘We understand that a significant number of boats and related products were sold by our exhibitors, Quay businesses enjoyed a booming weekend of trading, and those from the industry believed that we made boating accessible to a new audience. We really welcome the opportunity to provide an entry level to a new group of boating enthusiasts.”

Among the exhibitors were sponsor Coleman Insurance Brokers, whose team said they were asked for a number of marine quotes during the show. Tony Pauffley, senior development executive, said: ‘It is fantastic to have a local boat show in Poole Harbour. We are proud to be one of the sponsors at this event and to have been involved in the organisation. The support that we have received from the marine industry as a whole has been superb and allowed the Poole Harbour Boat Show to be the success that it has been. Lots of us spend our lives working in and around the harbour and this weekend has been really good to show the public a part of our world’.

Poole Quay and Poole Quay Boat Haven will continue to host the boat show and the event will be extended further along Town Quay in coming years.  If you are interested in exhibiting or sponsoring, please contact us on the details below: