Maritime heritage: building on the past to construct the future

Port Rhu and Tréboul, in the pretty Bay of Douarnenez in Brittany, joined TransEurope Marinas back in 2014. Organising and hosting world-class coastal and offshore regattas and putting on a spectacular show every two years with the maritime heritage festival “Temps Fête”, this town provides a fascinating example of a comprehensive nautical destination.

One of the pressing current debates in the nautical industry concerns how to engage today’s youth in boating. Isabelle Ménard, in charge of public policy at the Port-Musée in Douarnenez, recently joined other French maritime heritage groups and associations in an Erasmus exchange event held in Betina, Croatia.  Topics for this year’s exchange focussed on both how museums can use innovation to attract a young public and the links between local heritage and tourism. The great benefit of these events, described Isabelle, is being able to discuss new ideas and learn from each other. 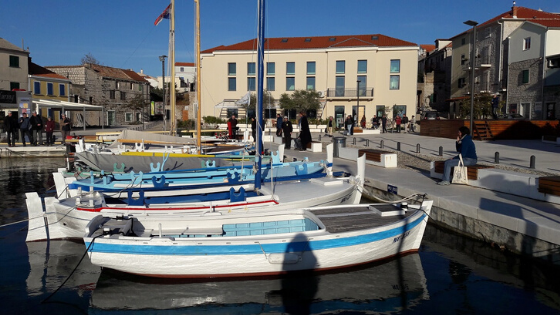 More than a hundred years ago, Douarnenez represented the world’s largest sardine export industry, with a fleet of over 800 fishing vessels supplying the town’s 30 sardine canning factories. The collapse of fish stocks however in the latter part of the 20th century marked a serious decline in activity and the local economy.

Based in Port Rhu, in one of these same canning factories and first opened in 1992, the Port-Musée is today a successful maritime museum, particularly popular with families due to the accessibility of its collections. Apart from the many fascinating exhibits inside the museum, visitors can also continue to the quay just outside, where eight historic vessels are tied up, four of which allow people on board. The museum offers plenty of hands-on activity in school holidays with games, treasure hunts, history tours and traditional nautical crafts such as ropemaking.

Beyond the Port-Musée, Douarnenez also holds the biennial Temps Fête, a maritime heritage events that attracts some 2000 boats and an international public that come to admire the vessels, take part in the parades and enjoy no less than 60 performances on stage and around the pontoons.

Isabelle explained that a great deal of collective effort and drive lies behind such endeavours, where the main goal is to reconnect people with their maritime past. A celebration of local maritime history needs to be closely tied to the area, focussing on idiosyncratic features, cultural values and geographical coastal identity. This takes considerable work in order to prepare material, curate exhibitions and design participatory activities. It also requires significant funding. The museum boats alone need constant maintenance which provided by up to 7 local specialists. Across Europe however, she says, public funds to support this type of project are generally either dwindling or non-existent, creating pressure to find private support.

Beyond funding, as in any social project, big cultural events and long-term programmes need to include the area’s entire associative network; they also rely heavily on volunteer involvement, which is certainly not a given in many areas. Douarnenez has a notably strong volunteer body, and yet this too is an ageing demographic meaning that engaging younger participants is vital to being able to continue the tradition.

Encountering red tape and seeking permissions can also be a huge obstacle, which is where the strength of national associations can be useful in helping to recognise the value of maritime heritage and advise on shaping policy.

Isabelle offered a summary of the role of maritime heritage in children’s education:

“The involvement of young people in the enhancement of maritime heritage is everyone’s business. From school to volunteering, a whole path of discovery and education in the various aspects of maritime heritage should be offered to children. The modern tools we have at our disposal today can enable us to make this heritage more attractive and more fun, in order to help raise awareness in young people. We must be able to build on the past to construct the future.”

Looking to the past for future ideas

Engaging people with their maritime past does not serve simply to appeal to our romantic appreciation of beautifully crafted wooden vessels and tanned sails – or to the popular trope of the lonely but adventurous voyaging mariner. Alexis Leon Bottarelli, manager of Douarnenez’s marinas Port Rhu and Tréboul, explained that the town offers coastal excursions and sailing classes in traditional boats and has become attractive to eco projects, with sail-driven cargo transport company TOWT a prime example.

Douarnenez is also a stop-off for other classic sailing regattas such as the Coupe de Deux Phares that races from Plymouth to Douarnenez and then on to La Rochelle. The town has a strong Dragon fleet and organises some highly impressive inshore and offshore regattas such as the week-long Grand Prix Guyader and the Mini Fastnet.

The port manager went on to explain that other benefits to the town have included reinforcing the image of the port and the area as synonymous with maritime heritage and providing work and support for yards specialising in traditional boat-building techniques. Courses to improve wider maritime skills are also offered to the public including sail-making, nautical upholstery and sail tanning.

It becomes clear that through tenacity and a great deal of passion, Douarnenez has managed to rethread nautical tradition back into the culture and economy, creating new opportunities and a perfect setting for inspiring future sailors.