Three months after a dramatic final to the RC44 World Championships, 14 teams arrived in TransEurope Marina member Puerto Calero, Lanzarote to kick off the 2012 RC44 Championship Tour. Racing in the challenging open waters is what makes Puerto Calero one of the best year-round sailing venues in Europe.

Of the seven main Canary Islands, Lanzarote is located furthest to the north, meaning sailors can take full advantage of the predominant NE Atlantic trade winds. Puerto Calero is situated on volcanic Lanzarote’s south coast, which is more sheltered, featuring the famous sandy beaches that make the island a popular holiday destination.

Puerto Calero is internationally recognised as one of the world’s most modern and welcoming marinas. Set against a backdrop of outstanding natural beauty, it is well-positioned for Lanzarote’s extraordinary cultural attractions, the international airport and major services, and as you would expect from what is effectively Europe’s south coast, enjoys glorious all-year round weather.

Puerto Calero not only offers every service a sailor – whether recreational or world class – could need, but it also has a relaxing leisure environment. Free time can be spent enjoying a range of activities including deep sea fishing, kayaking, diving, golf and tennis, relaxing in the spas, appreciating art and culture, or making the most of the superb restaurants. 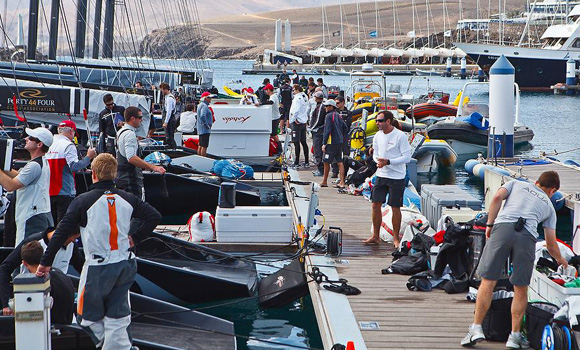 Visiting Puerto Calero for the fifth consecutive year since 2008, this will be the second time the venue has launched the RC44 season, the last being 2009. Puerto Calero has also been honoured to played host to the class’s first World Championships held in 2010 and 2011.

The RC44 class embodies one of the very best elements in sport with an immensely focussed level of top competition out on the water and yet one of the friendliest and relaxed atmospheres on-shore. Owners, pro-skippers, crew, press, umpires and visitors share drinks in the regatta tent after each day’s racing and thePuerto Calerogala dinner sees uproarious entertainment and much laughter with teams competing on stage in comedy games.

Within a tight framework of one-design racing, the events comprise one day of match Racing and four of fleet racing and the 8-person crew is split 50/50 between professional and amateur sailors with the pro-skipper at the helm during the initial match racing day and owner driving throughout the fleet racing.

With six wins and no defeats Team Aqua led by helm and tactician Cameron Appleton won the Match race. Former World Match Race Champion Ed Baird was at the new helm of Synergy Russian Sailing Team and they nearly finished the first day with a clean sheet, had it not been for a ripped spinnaker in their race against Katusha, who also finished the day with a 5-1 score-line with new helmsman Brad Butterworth.

Chris Bake and the crew of Team Aqua (GBR) started the fleet race slowly with a 10th and 13th, but quickly got in the groove slotting in four wins, a second, third and fourth to give them victory by 11 points over second placed Aleph Sailing Team (FRA). Torbjorn Tornqvist’s team Artemis made it up the podium, just two points adrift of the French. 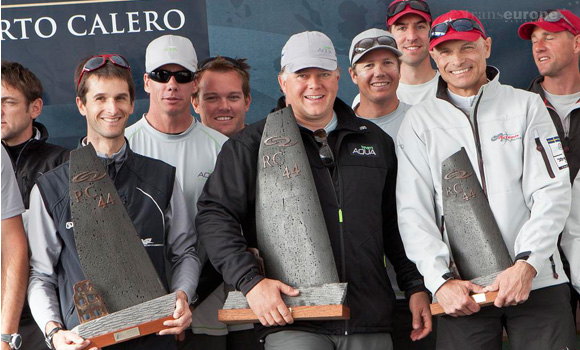 Hosting an event of such a level is extremely beneficial for the marina as a whole. The RC44 Championship attracts journalists from all over the world, which significantly improves the public awareness of the marina. Local visitors and resident boat owners have the chance to admire the boats, chat to crews and follow the racing. Hotels and apartments on the estate also appreciate the business as do the restaurants lining the waterfront. The boatyard was fully booked in the months preceding this event with competitors busy painting their boats and this regatta with its many now familiar faces imbues the whole marina with a lively and thrilling atmosphere.

We wish the class a successful and enjoyable year in each of the next venues and look forward to the return of this spectacular fleet.