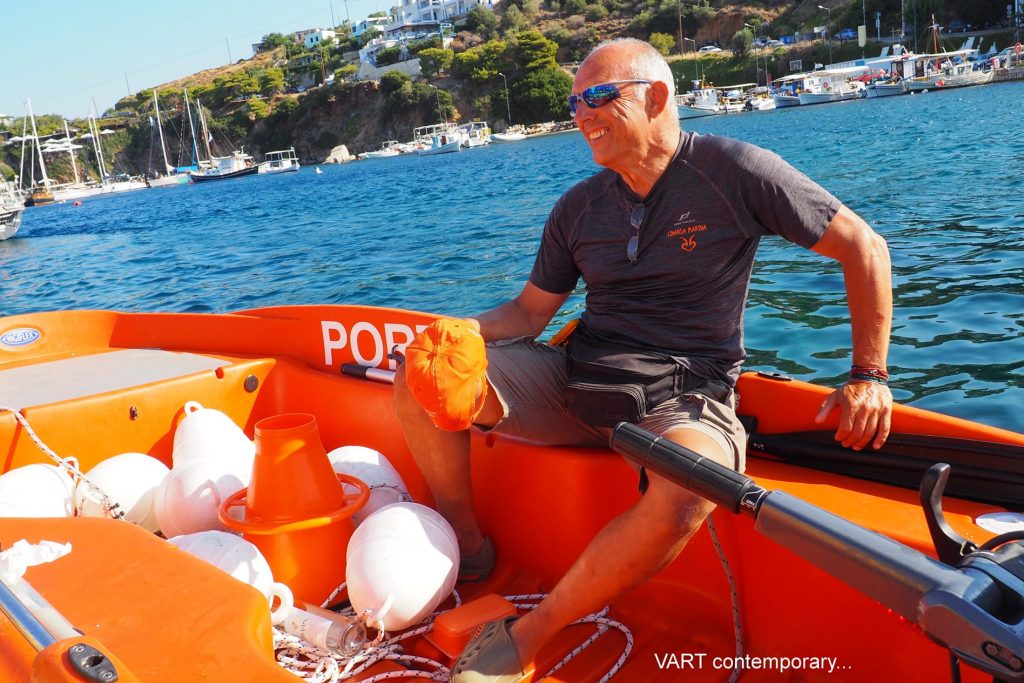 Kyriakos Antonopoulos, Port Manager and one of the two founders of the SKYROS project

An award-winning environment programme based in Linaria Marina on the Greek island of Skyros.

Enriching today’s society with environmentally active citizens is a mandate on a global scale. Αt Linaria, the small port of Skyros Island, a model Greek community known as SKYROS Project, has made its appearance,

Every summer, a unique and pioneering Summer Academy of Environmental Trainers operates with the aim of supporting all those who want to promote “responsible environmental behaviour” as well as to “ensure quality of human health”. The #skyrosproject team (a collaboration of the Department of Public and Community Health of the University of West Attica with the Skyros Port Authority) has reached 7,600 fans on its Facebook page. The participation of even more followers will strengthen our voices for an effective environmental protection and for claiming a decent everyday life for all.

SKYROS PROJECT is the creation of the collaboration between two public sectors. This “golden” unity involves the Environmental Education, Training and Communication Research Unit of the Department of Public and Community Health, University of West Attica, with the Skyros Port Authority (supervised by the Ministry of Shipping), which is the responsible Agency for the Management and Exploitation of the Port of Skyros

Skyros Project was launched at the port of Linaria, in Skyros, in the summer of 2015, initially as a collaboration between Skyros Port Authority with the Department of Environment, University of the Aegean, an academic institution that still remains on board in this cooperation. The founders of Skyros Project are the President of Skyros Port Authority, Mr. Kyriakos Antonopoulos and Mrs. Constantina Skanavis, Professor of Environmental Communication and Education at the Department of Public and Community Health, University of West Attica (Former Professor of the Department of Environment, University of the Aegean). The Skyros Project foundation introduces a new way of practicing environmental and health education where participants are being trained while in turn, they educate others. The programme’s goal is the enforcement of responsible environmental behavior and the encouragement of practices that promote good health and well-being and as such, the port is serve as an educational tool to these ends, where theory is translated into practice. Every year, a significant number of college students, from various countries, cdome to join the programme. Participants take part in conferences, competitions and research, investigation and assessment of the issues of concern at the port of Skyros and the island in general. They focus on developing environmental attitudes and the health and hygiene profiles of the residents and visitors. Two Tourist Observatories, three Maritime Tourism Observatories, a Daily Environmental Kids’ Camp, presentations, lectures, environmental care and educational programs are all being offered at the Port of Skyros as part of this Skyros Project.

The #skyrosproject team has presented its work at numerous conferences and workshops around the world (Italy, Dubai, UAE, Japan, Spain, Morocco, New York, Boston, New Jersey, Austria, Norway) and is anxiously waiting traveling to be resumed in order to continue its journey to more destinations.

Visitors at this tourist port, make part of their own daily habits, the experience being gained during their stay at Linaria. Their environmental behaviour is seriously strengthened, and they end up adopting a pro-environmental lifestyle.

The standard facilities of the tourist shelter of Linaria Port include, water supply, electricity, WIFI, use of WC and showers (with even a disco shower event every evening), permanent anchors, assistance of incoming boats with 2 port vessels, laundry machines/ dryers, secretarial support, outdoors cinema, free of cost lending library, exercising classes, fuel station, local weather report, remote monitoring camera for booking available spaces to park their boats, etc. All the above-mentioned services enhance the image of the port and facilitate reaching a state of art management of available facilities and the natural environment. The port has implemented a plan that responds immediately to possible marine pollution accidents and has an inhouse plan for dealing with the wastes generated by the incoming ships.

In collaboration with the Department of Atmospheric Physics of the University of Patras, a station for recording suspended particles of the atmosphere has been installed. To reduce the ecological footprint, electric tricycles are being used for moving around the port zone and an electric water saving machine has been acquired for cleaning the port zone area. In addition, the first in the whole country recyclable electrical compressor has been installed at Skyros Island’s port. Finally, the annual monitoring of the tourist imprint gives continuous data to all those involved with the tourism industry, for them to be in a position, to offer a competitive and safe tourist product (https://www.linariaport.gr/el/)

Based on all the above facilities, infrastructure, SKYROS Project activities and relevant services, the port maintains the first ever “Blue Flag” awarded, for three continuous years, to a small Public tourist port (2018 -2019-2020). Linaria Port is a member of the 106 European Green Ports (ESPO / Green Ports). Linaria Port participates in the EU program, Blue Med, with the aim of converting the boats belonging to the port to electrical ones and conducting a study and recording of the submarine disturbances in its maritime zone.

In the last 7 years, the port of Linaria has seen a 120% increase in revenues and a 1400% increase in incoming tourist boats. The evaluations of the innovative Skyros Project have exceeded the expected rating levels.  The program has been acclaimed as a triumph of environmental inspiration and health promotion consignment. It has invested heavily in the unique environmental image of this small tourist marina. Several Greek and foreign universities have developed partnerships with Skyros Project, highlighting the port of Skyros as a role model for the way small ports should be managed.

The SKYROS Programme is a permanent and recurring innovating educational approach. During its six years of action, it has won numerous awards, totaling to 14 ones: 1 World Award (came 1st for video production competition in the Climate Change Awareness category – Marrakesh, Morocco in 2016 at the Climate Change Summit), 2 European awards (one for coming first as the most popular video and a second award for the best production video category at the World Environmental Day / zero waste competition), 9 Golden National Awards (4 in Tourism – 4 in Environment – 1 in Education), 2 Silver awards,  1 honorary distinction and 3 special awards at the World Environment Day (Oikopolis Awards).

“Skyros” program is financially supported by the personal resources of its founders and the participating students, as well as limited contributions from friends of the program, Besides the mentioned sources, no other funding source has assisted the program.

International distinctions confirm the strong impression the programme has gained from environmentally concerned followers around the world. This also underlines the effective social networking power of Skyros Program. Its Facebook page alone has many fans worldwide. The programme’s page on popular social media, such as Facebook, offers an online get together of participants of the programme.  Visitors of this port, but also the ones who sail to other parts, find out about Skyros Project and quite often request to be integrated in the Eco-Community of this SKYROS program. This participation places the program in a noble competition for increasing its strength in the fight against environmental and health deterioration. Skyros Project is actively supporting a quality daily life and preservation of the environment, therefore ensuring respect of life for all around the globe.

The enrichment of today’s society, with active citizens on environmental and health issues, is an urgent need on a world-wide scale. Based on this concept, at Linaria, the small port of Skyros, this Greek community of SKYROS Project has become a pioneer one, spreading its messages all over.

YOUR PARTICIPATION will help us to effectively protect even more the environment and to claim a decent everyday life for the residents of our planet.

We are optimistic that in this coming summer, we will meet again in Skyros Island bring new groups of interested participants. Due to the COVID 19 pandemic experience, we are more ready than ever to continue our environmental and health promotion actions bring world safety to the next level.  ALL together we can manage to support effectively actions in health prevention and environmental promotion. Summer Academy for Environmental Educators has been set to start at the beginning of this coming July. Staying in schedule seems more possible, as Greece comes out of this pandemic with great success, concerning the measures taken to deal with SARS-Cov-2.

At Skyros Academy, all those who think they want to be actively involved in promoting responsible environmental behavior are welcome to join us. It is a week-long of learning in an enjoyable set up. Students from every scientific field and institution can become participants of this programme. The same holds true for interested teachers, journalists and those who wish to enforce our stand into securing protection of nature and health.

More information for enrollment in the Summer Academy of Environmental Educators can be provided by kskanavi@uniwa.gr.

Information about the SKYROS program at http://skyrosproject.uniwa.gr