The historic Cornish gem that is Mylor Yacht Harbour… 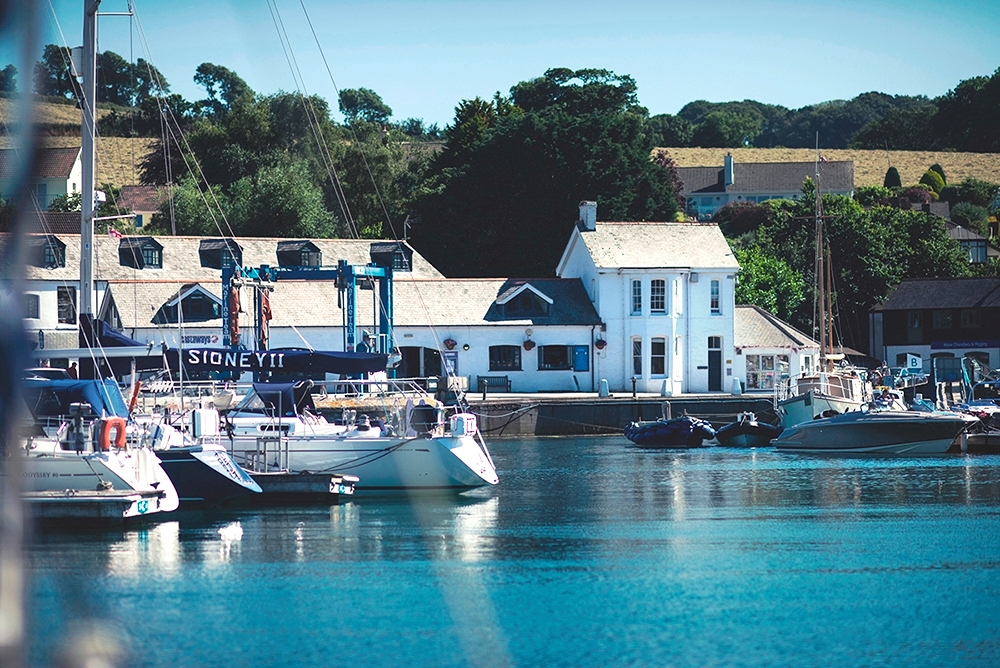 The waters off Mylor Yacht Harbour have been beloved of an international yachting community since the ‘60s and the great Sir Ben Ainslie learned to sail here as a boy.

But few of the international sailors gearing up their vessels for this year’s famous Falmouth Regatta Week would know that two hundred years ago, in the great days of sail, Mylor was England’s smallest naval dockyard in one of the world’s most strategic ports.

In 1805 the British Admiralty developed the site as a Royal Naval dockyard and from 1835 Royal Mail Packet Ships were maintained here. Many of the buildings at Mylor date back to this period and the current Harbourside holiday properties were originally their hospital.

In 1866 HMS Ganges was moored at Mylor and used as a training ship for cadets. During this time and into the early 1900s the harbour served as a service yard for watering and victualing ships.

During the Second World War, American Navy personnel were stationed here to work on landing craft used in the D-Day landings. The harbour also served as a secret base for Free French Resistance fighters, from which they made undercover forays into occupied France.

As such Mylor is a place where past meets present – a thriving marine haven and working harbour which, with consistent investment through the last 20 years, it is now one of the South West’s busiest boatyards and marinas with first class pontoon berths and safe moorings anchored in some of the country’s finest sailing waters.

In 1997 new owners of the harbour set about a £5 million investment programme which would match the fabric and infrastructure of this Cornish gem to its sublime natural environment. This vision enabled the creation of a modern marina and onshore facilities, securing the preservation of the historic buildings, landscape and working traditions for future generations. Recent shore-side development has seen the building of a new yacht club, café and shops, shower blocks and a new marina office – along with the demolition of the dilapidated old yacht club in order to save and protect the Grade II Listed Quay on which it stood.

Mylor’s boatyard thrives and expands with its Marine Team of master craftsmen and technicians with the expertise to match any vessel – ancient or modern – from re-building or restoring the sleekest of classic yachts to the complete refurbishment of Cornish fishing boats. It is the only yard in recent years to build new, wooden Sunbeam classics – on exactly the same lines as their century-old sisters – which race together as one of the most competitive fleets in the country.

Mylor can accommodate boats up to 70 foot and a maximum of a 3m draft, with 180 marina berths and 250 swinging moorings. Mylor’s boat hoist has the capacity to lift 35 tonnes and there is a private slipway for use by Mylor Yacht Harbour as well as a public slipway.

Owing to a high demand for marina space the Harbour is currently in the midst of a widespread consultation into a project which could see more than £1 million invested in a small and sensitive extension to its existing marina which would create an extra thirty berths.

Berth holders have access to discounted fuel – petrol and diesel – as well as the modern shower block, electricity and water supply and use of the water taxi service. They can also take advantage of discounted stays in Mylor’s luxury self-catering holiday properties – Mylor Harbourside Holidays – and they have free shore storage, free parking and membership to Transeurope marinas.

If you would like to find out more about Mylor Yacht Harbour, its Marine Team, Marina or self-catering holiday cottages please see www.mylor.com or call 01326 372121.